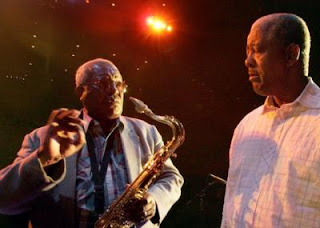 During the second half of the 20th century, cosmopolitan Ethiopians were delighted to see jazz giant Duke Ellington receive their country’s Medal of Honor from Emperor Haile Selassie. At the same time, by contrast, a Berklee College of Music-trained Ethiopian jazz legend, Mulatu Astatke, who fused jazz and funk with his country’s folk and Coptic Church melodies, was unknown in the United States.
In the 1960s, as the tastes of American jazz fans shifted from bebop to avant-garde, Ethiopian musicians were establishing a tradition whose compositions are just reaching American ears. Why did it take so long for this riveting, emotionally charged music to arrive?

Ethiopian musicians like Astatke, singer Alemayehu Eshete, and guitarist and arranger Girma Beyene have devoted their lives to blending Ethiopia’s traditional five tones per octave, or pentatonic scale, with Western chords. Listening to the music they have produced shows the variety of influences on their approach to jazz.

Astatke traveled to London, Boston and New York in the 1960s, where he heard African-American and Latin jazz to which he added pentatonic scales. This spawned “Ethio Jazz.”

Eshete and Beyene created a subgenre called swinging Addis by combining the songs they learned from the Ethiopian Police Band and the Haile Selassie I Theatre Orchestra with the rhythms they heard on the records of Sam Cooke, Nat King Cole and James Brown, brought to Ethiopia by Peace Corps volunteers. As Ethiopian musicologist Simeneh Betreyohannes says, “Most Ethiopian jazz artists did not go abroad; music was their way of traveling.” (read more)