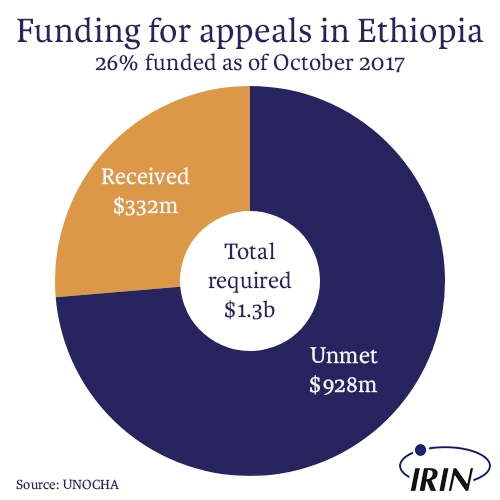 Ethiopia can’t seem to escape the blight of drought, no matter how hard it tries. Despite impressive economic growth and decades of capacity building, it faces another humanitarian crisis as one of the worst droughts in living memory scorches the Horn of Africa.

At the beginning of the year, 5.6 million Ethiopians were in need of food aid, primarily in the south and southeast of the country. That number recently jumped to 8.5 million.

An additional headache is that this year’s response by the government and international partners is proving less decisive than last year’s effort. In 2016, more than 10 million people were reached, food aid poured in, and the government spent hundreds of millions of its own money averting a major humanitarian catastrophe.

Why are the numbers in need increasing?

The January estimate of 5.6 million came from the government’s Humanitarian Requirements Document, an annual assessment in collaboration with international partners detailing Ethiopia’s humanitarian needs. The revised figure followed spring rains in April that petered out too soon, taking any hopes of revival with them.

“The situation is unprecedented,” said Sam Wood, Save the Children’s humanitarian director in Ethiopia. “That was the third failed rainy season in a row, so it’s a cumulative effect of failed rains hitting vulnerable communities.

“Ethiopia has made lots of progress, but when you have a problem of this sort of scale, duration and scope, any system is going to be overwhelmed.”

Adding to concerns is the chance the Hagaya/Deyr short rains (October to December), accounting for up to 35 percent of annual rainfall in the southeast, could prove a dud too due to the continuing El Niño effect.

The current humanitarian bill is $1.26 billion. So far only $334 million has been received. (Read More)